The First School Desk Looked Nothing Like It Does Today 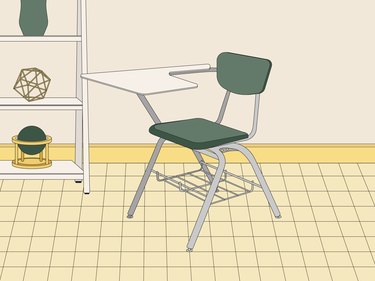 Whether you attended public or private school as a kid — or even if you were homeschooled — there is a pretty significant chance you sat at a school desk. But have you ever thought about how the ubiquitous piece of education-related furniture came to be? In honor of back-to-school month, we're taking a dive into the history of the humble school desk, which has a more interesting backstory than you might expect.

Prior to the mid-19th century, there were no education laws in the United States that required students to attend school, which ultimately meant that many children simply joined the workforce at a young age. Since there was not much societal focus on education, the furniture in most schools was pretty bare bones. Rather than sitting at desks, students typically sat on backless benches, according to the U.S. Department of State's ​English Teaching Forum​.

When was the school desk invented?

The Museum of Teaching and Learning explains that the modern school desk as we know it didn't come about until the second half of the 1800s. This is when education reform created the public school system, and there was high demand for furnishings for students. From roughly 1850 through the end of the century, inventors and furniture designers across the country rushed to make school desks to fill classrooms, and the modern school desk was born. 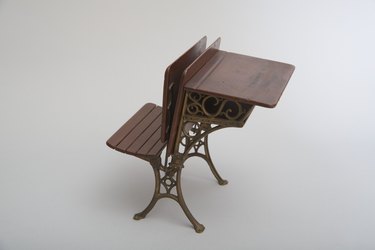 Most models were designed to be arranged in columns; chairs had desks attached to their backs, providing a workable surface for students but also saving space in the classroom. (Separate desks and chairs would take up more square footage.)

Who invented the school desk?

Because there was such a flood of desk designs hitting the market in the late 19th century, it's hard to credit a single person with the invention of the school desk. But one of the earliest was Herbert L. Andrews of Chicago, who filed a patent for his desk in 1868. 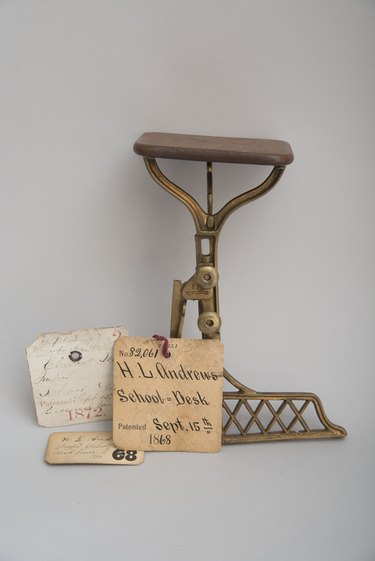 "The object of my invention is to construct the two parts of the standard of a school desk and seat which is adjustable in height, so that the two parts shall be more securely held together and in place; to construct a simple and convenient joint for the arms of the seat; to construct such joint so that it shall be noiseless, and so that the seat shall not strike against the back; and to so make the several parts that, when they are together, the seat-arm shall be secured in its place without the use of a bolt or nut, and in a manner simple, novel, and efficient," Andrews wrote in his application letter, detailing his design goals.

But the most popular desk of the era was designed by John D. Loughlin for the Sidney School Furniture Company in Ohio. The Shelby County Historical Society states that his model, the "fashion desk," made its debut in 1881; the company earned $75,000 in profit that year, which is more than $2 million today when adjusted for inflation. 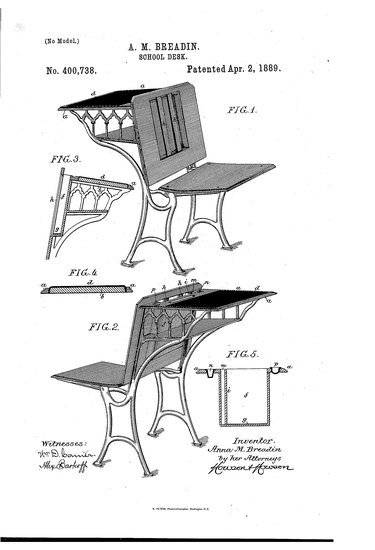 Loughlin never filed a patent for that desk, though, so others riffed on his idea — including Anna Breadin, who patented her design in 1890.

Where do schools buy their desks today?

Of course, most students don't sit in these 150-year-old wooden desks anymore! Desks have since evolved, branching out into many different styles. Some early desks were designed to provide storage space for students, such as the 1920s Welsh school desk, which sat two students side by side. 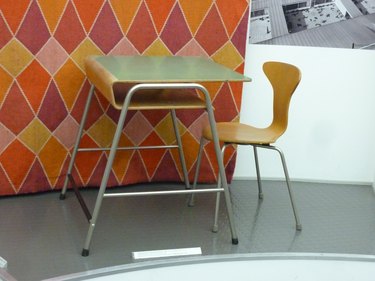 But the biggest overhaul didn't happen until the 20th century, according to EdTech, when iconic mid-century designers like Jean Prouvé and Arne Jacobsen tackled the piece of school furniture. In particular, they introduced more streamlined shapes and new materials like plastic.

Then, in the 1970s, a revolution took place when the wraparound-style desk, in which a fairly small desk emerges from the side of a chair, was invented. This is ​still​ an incredibly popular model found in schools today. 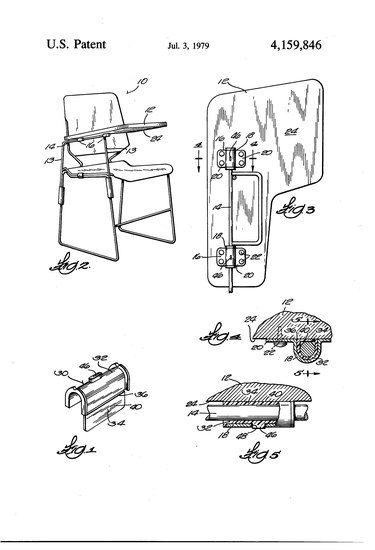 As for where schools buy desks today, there are a number of furniture manufacturers producing all varieties of school desks, including Virco, Herman Miller, Steelcase, and KI, among many others.

Altogether, this is something we wish we actually learned in school.

Print Details
Previous post
Next post
Gorgeous Getaways: 5 Private Islands You Can Buy Right Now
How Much Does It Cost To Build a House—and Is It Cheaper To Buy or Build?