This Apartment Building With "Indoor Balconies" Is Creeping Out the Internet Have you ever seen an apartment building featuring "indoor balconies"? Yeah, us neither. That's why we, along with many others, are currently freaking out over a TikTok clip shared by user @rayyy.of_sunshine.

In the video, @rayyy.of_sunshine writes, "This is the WEIRDEST apartment complex I've ever seen." We couldn't agree more. The actual video shows a hallway in an apartment building. Above each door, there is a small dark wood balcony with a door leading to the inside of the apartment. In other words, each unit has a balcony that ... looks out onto the hallway. Creepy. 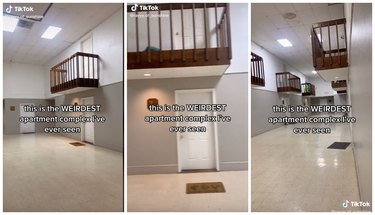 "It looks like some post-apocalyptic housing center for survivors that still want some normalcy but can't go outside," writes commenter @terrytoro. User @luckystar0515 adds, "Looks like a place you go in but you never come back out."

Why are there indoor balconies?

In another TikTok video, @rayyy.of_sunshine offers this possible explanation for the bizarre design choice: "Apparently there are balconies because some rooms literally don't have windows and apparently, that doesn't meet fire code. But if they have a balcony, then it's fine because if there's a fire, then they can jump from the balcony."

So, in addition to the indoor balconies that look out over the hallway, some of the rooms also don't have windows. No, thank you.

What does the inside of the unit look like?

In yet another video, @rayyy.of_sunshine gives her followers a tour of one of the units. But first, she explains that she does not live in this building — instead, she's temporarily living there with a roommate while they wait to move into another apartment.

Aside from the hallway balcony, the apartment appears to be fairly normal. There's a living room, kitchen, bedroom with a window, and a bedroom without a window. The latter is the room with the indoor balcony, which looks equally as creepy when you are actually standing on it.

We're adding "indoor balcony" to the list of home and apartment features we definitely do not want in our lives.

Print Details
Previous post
Next post
When will the topsy-turvy local real estate market calm down?
3 Must vs. Lust Buying Tips to Avoid Overspending