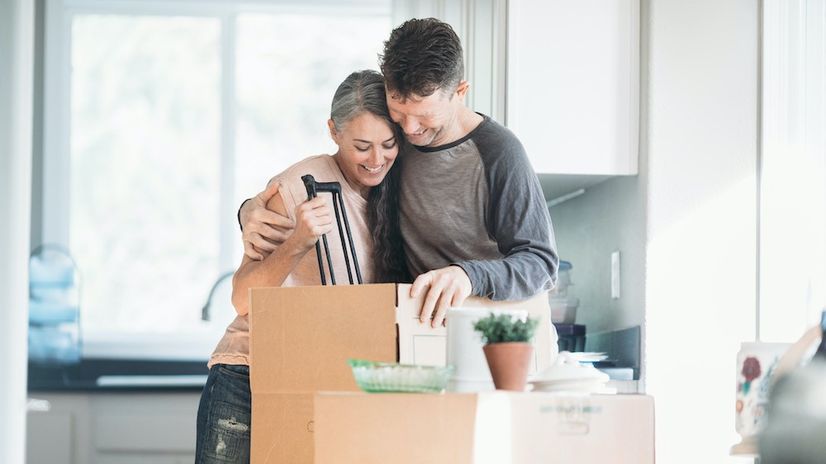 Moving is the perfect opportunity to declutter, jettisoning the dead weight of your unneeded stuff before you haul it into your new home.

Yet while the very best time to cut your losses is before you pack your things, unpacking is another prime opportunity to edit your belongings, too.

It could easily come in handy, especially if you packed in a frenzy, without fully considering what to keep or toss, or if you hired movers to pack up everything for you.

So if you’re ready to wipe the slate clean, here’s how to declutter while unpacking—and how this strategy helped with my own most recent move.

Unpack room by room, starting with the essentials

“Don’t unpack a little bit here or a little bit there,” says Megan Ludvinsky, a professional organizer and owner of About Space in Little Rock, AR. “It’s much better to have one room fully unpacked than three rooms a quarter of the way unpacked.”

Ludvinsky recommends starting with essential items, like bedding, toiletries, medications, a coffeemaker, or whatever else you need for the first day in a new place. Pack these in a way that you can find them easily.

Keep purging as you unpack

Even if you thought you did a lot of sifting as you were packing, you’re sure to find more that you don’t need or want as you unpack.

“You definitely want to kind of ruthlessly edit everything that’s coming out of the box,” Ludvinsky says.

She suggests setting aside some empty boxes and tossing in items you don’t want, before you put them away. Then, take them to a donation center.

This tactic worked wonders for me in a recent move: As we were unpacking, my husband and I found several things that we realized that we no longer wanted or that didn’t work in our new home, so we donated them before they took up permanent residence.

Separate items by general category, then zero in

When unpacking, work “macro and go to micro,” Ludvinsky recommends.

In other words, group like items together, think about where they should go, and put them in a tentative place.

“They don’t have to be arranged in a beautiful manner yet. You just want to get all your plates together and cups and glasses together, and so on,” Ludvinsky says.

This helps the unpacking take shape, and gets all the boxes out of the way, so you can get a sense of living with the items in those spots. As you put things where you think you want them, don’t feel that the spot has to be permanent. It’s OK to change it up if it’s not working.

“Then you really start to hone in on the micro,” Ludvinsky suggests, like putting silverware in the silverware tray or arranging dishes in a logical way.

This was a key stage of the unpacking process for us. We randomly hung our clothes in closets and dumped boxes of shoes on the closet floor to get them out of the way.

Later, I fine-tuned everything, hanging dresses with dresses and sweaters together, and bought boxes to organize the shelves in the closet. In the kitchen, we tossed pots, pans, spatulas, and wooden spoons in the cupboards and drawers near the stove. Once we decided the items were staying put, we added cork liners and trays to the drawers and arranged the cabinets definitively, so we could easily grab what we needed.

Use organizers to cut clutter

After you’ve found a home for all your items, it’s time to get sort everything out for good. Examine each closet, cupboard and drawer to size up what kinds of trays, boxes, or other tools can help make things easier to access visually.

“It’s going to just look neater and make your whole area much more cohesive,” says Ludvinsky, explaining that adding organizational tools is part of the “micro” stage of organizing and unpacking.

She also suggests getting trays and boxes that match, if possible.

We spent a small fortune on trays, bins and other organizers, but it was worth every cent. The organizers designate a place for everything, so that it can easily be returned there. More than a year later, this has kept the spaces from becoming junky. Put things back where they go

To get everyone used to where different items live, Ludvinsky recommends sticking a note to the outside of a cabinet or drawer, listing its contents. Leaving them in place for a couple of weeks will help everyone to remember both where things go and to put them away in the right place.

Giving everything its own spot and always returning an item to that spot are essential for a clutter-free home.

“It prevents things like a colander from ending up with the dinner plates, and also helps family members develop automatic responses to finding and storing necessities,” Ludvinsky says.

We didn’t label our cupboards after unpacking, but it would have been a big help in getting used to where things go. Labeling would have made tasks like unloading the dishwasher and putting away laundry a little easier after we just moved in. Print Details
Previous post
Next post
The BEST Way To Clean An Oven (It's SO Easy!)
Here’s How Often You Need to Replace 17 Common Household Items